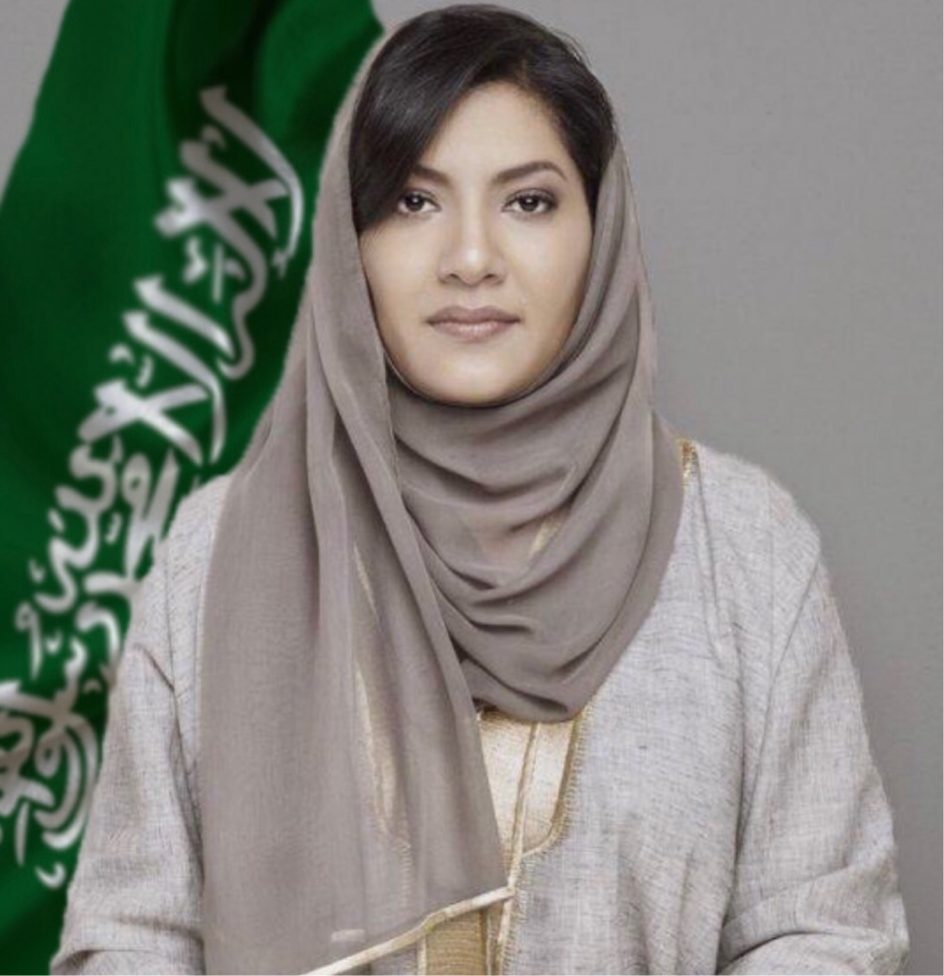 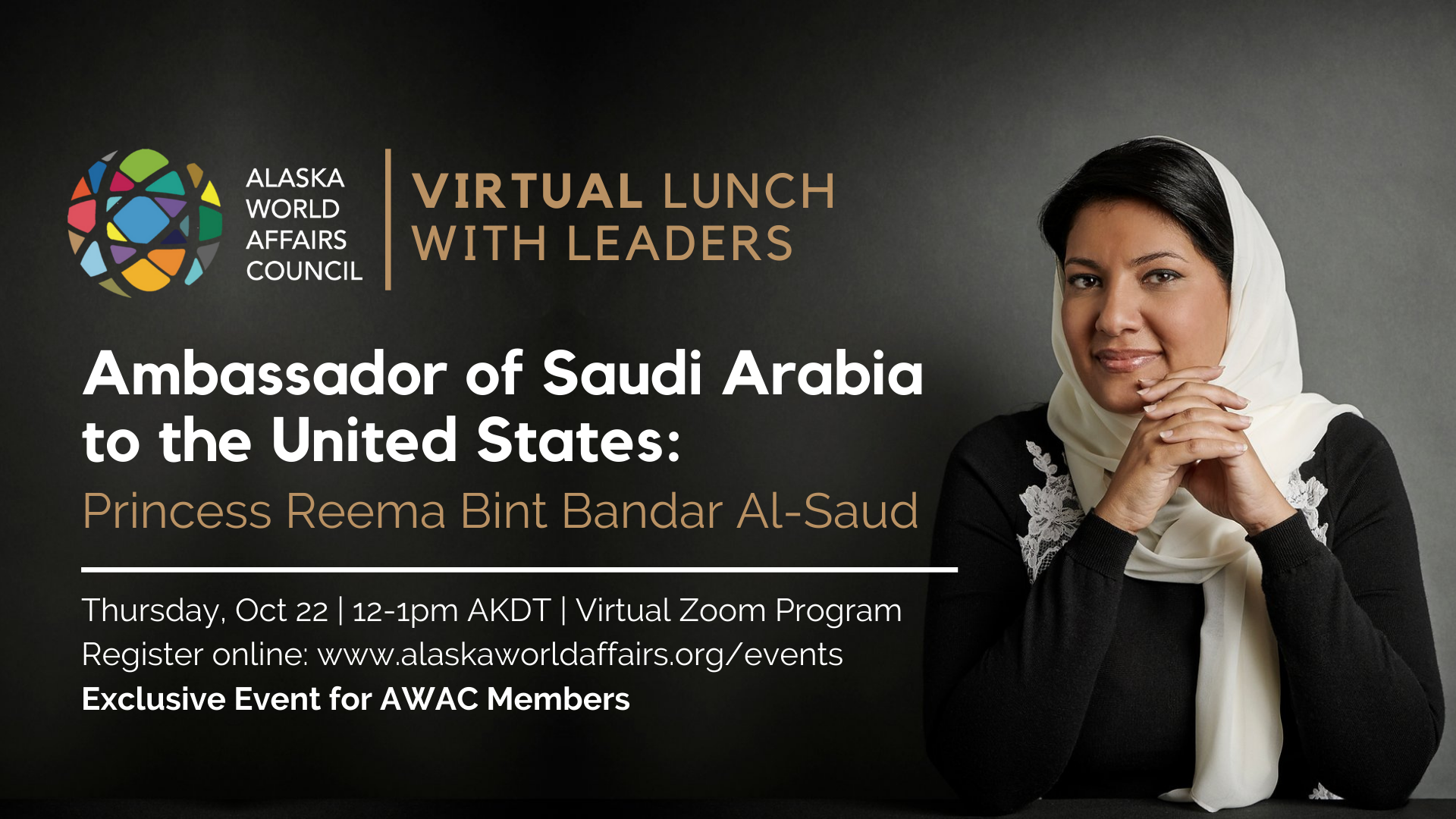 This special event is only open to current AWAC members.

If you are currently a member, Thank You for support the Alaska World Affairs Council.              If you would like to become a member, click here to join.

Her Royal Highness Princess Reema bint Bandar bin Sultan bin Abdulaziz Al Saud was appointed Ambassador to the United States on February 23, 2019 by the Custodian of the Two Holy Mosques King Salman bin Abdulaziz. She is the first woman in the country’s history to serve in the role of Ambassador. She presented her credentials to President Donald Trump on July 8, 2019.

From 1983 to 2005, Princess Reema lived in Washington, DC, while her father Prince Bandar served as Saudi Ambassador to the United States. She attended George Washington University where she graduated with a Bachelor of Arts degree in Museum Studies.

Princess Reema returned to Saudi Arabia, where she focused on private sector initiatives and the empowerment of women in the Kingdom. In 2000, She co-founded Yibreen, a women’s gym. From 2007 until 2015, Princess Reema was the Chief Executive Officer of Alfa International Company Limited – Harvey Nichols Riyadh, a multi-brand luxury retail company, where she collaborated with leading female recruitment agency, Glowork, and commissioned a study on Obstacles for Women in the Workplace, which set the tone for female inclusion in retail, and resulted in opening the first workplace nursery in a retail store, enabling more women to work while caring for children. In 2013, she founded Alf Khair, a social enterprise aimed at elevating the professional capital of Saudi women through a curriculum developed to enable financial self-sufficiency.

In 2016, Princess Reema left the private sector to begin a career of public service as Vice President of Women’s Affairs at the Saudi General Sports Authority where she developed policies and programs that benefited women and children throughout Saudi Arabia. After a successful year, she was promoted to Deputy of Development and Planning in January 2018. In October 2018, she was also appointed President of the Mass Participation Federation, making her the first woman to lead a multi-sports federation in the Kingdom, a role that she occupied until her appointment as Saudi Ambassador to the United States.

Lise Falskow was born and raised in Alaska and holds a degree in Economics and Accounting from Claremont McKenna College. She worked as a CPA in Seattle, Washington and Zurich, Switzerland. She then helped establish a Financial Analyst Group for the Energy Division of a major oil company in Oslo, Norway. As a dual Norwegian and US Citizen, her interest in world cultures has taken her to many exciting places, including her return to Anchorage, Alaska where she is the Royal Norwegian Honorary Consul for Alaska and the President & CEO of the Alaska World Affairs Council. Lise has a passion for sports, music (including playing the piano), and participating in Ironman Triathlon Competitions.

General Joseph Ralston (USAF, Ret.) completed a distinguished 37-year Air Force career in 2003 as Commander, US European Command and Supreme Allied Commander Europe, NATO. As NATO commander, General Ralston contributed to preserving the peace, security and territorial integrity of the NATO member nations while commanding approximately 65,000 troops from 39 NATO and other nations participating in ongoing operations in Bosnia-Herzegovina, Kosovo and the Former Yugoslav Republic of Macedonia. He also led the efforts to integrate the three nations that were admitted to NATO in 1999 and oversaw the process to invite seven nations to join NATO in 2002.

As head of the U.S. European Command, he was responsible for all U.S. military activities in 89 countries and territories covering more than 13 million square miles of Europe, Africa, and the Middle East and involving the activities of all U.S. Army, Navy, Air Force, and Marine Corps forces operating within its area of responsibility. Ralston entered the U.S. Air Force in 1965 through the ROTC program. His career in the Armed Services includes operational command at squadron, wing, numbered air force, and major command, as well as various influential staff and management positions at every level of the Air Force. Gen. Ralston is currently the Vice Chairman at The Cohen Group.

This special event is only open to current AWAC members.

If you are currently a member, Thank You for support the Alaska World Affairs Council.              If you would like to become a member, click here to join.