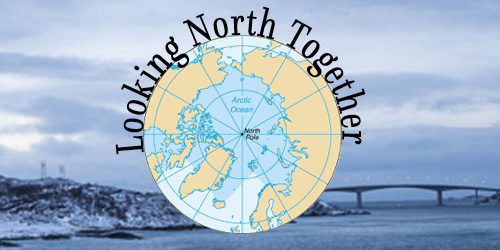 His Majesty King Harald V of Norway addressed a packed audience on May 27th at Anchorage’s Dena’ina Center for the first event in the Alaska World Affairs Council’s Arctic series. The roundtable luncheon, Looking North Together: the US and Norway in the Quest for Arctic Knowledge, marked the beginning of the U.S. Chairmanship of the Arctic Council and featured scientists, diplomats and explorers from Norway, Alaska and beyond. The event, generously sponsored by the Norwegian Ministry of Foreign Affairs, celebrated the strong bonds between the U.S. and Norway and in particular the vibrant Norwegian community in Alaska. 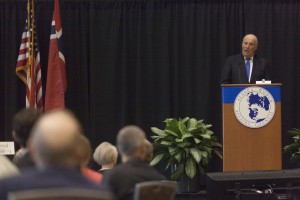 In his opening remarks King Harald spoke of the need for more research into Arctic warming stressing that knowledge is the key to deepening our understanding of the region. “Research and accurate data is essential in our struggle. Without it, we will never understand the complexity of our region,” he said. He spoke of finding inspiration from the great Norwegian polar explorers many of whom were also accomplished scientists.

AKWorld President and CEO Lise Falskow noted, “His Majesty’s visit to Alaska was a day to remember especially for the Norwegian community. His message about our struggles against climate change and the need to be proactive was inspirational and reminded me of the Viking spirit to charge on in the face of adversity. Climate change is a battle the world will need to work together to reduce its consequences.” 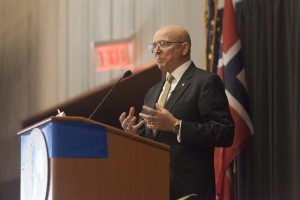 The luncheon also featured Admiral Robert Papp, U.S. Special Representative for the Arctic Region, who outlined the key themes of the U.S. Chairmanship of the Arctic Council: shared opportunities, challenges and responsibilities. He also asked for Alaskans’ support by encouraging them to get engaged and involved in the Arctic. Fran Ulmer, Chair of the U.S. Arctic Research Commission, called for Alaskans to help raise awareness of Arctic issues and look for opportunities for collaboration with partners in other Arctic nations. Craig Fleener, Arctic Advisor to the Governor of Alaska, spoke of the need for Alaska to be able to develop its resources and economy whilst increasing our understanding of climate change. “We need a national imperative on the Arctic, and it must be a unified approach,” he said.

Harald Steen from the Norwegian Polar Institute and polar explorer and adventurer Børge Ousland also gave presentations at the roundtable. Harald Steen described some of his research into the thinning sea ice in the Arctic and the need to collaborate with other nations in order to understand the implications of the rapid changes occurring in the Arctic. Børge Ousland described seeing such rapid warming ‘with his own eyes’, as he undertook the first circumnavigation of the Arctic in just four months, something that would have taken several years in the era of Roald Amundsen.

To listen to this program, please check-out AWAC Presents on Alaska Public Media.

More event photos can be found on our Facebook page by clicking here.

Opening Remarks from His Majesty King Harald V of Norway
His Majesty King Harald V of Norway was born on 21 February 1937 at his parents’ home, the country estate of Skaugum, near Oslo. The only son of Crown Prince Olav (the future King Olav V, 1903-1991) and Crown Princess Märtha (1901-1954), he acceded to the Throne when his father passed away on 17 January 1991. Prince Harald completed his upper secondary education at Oslo Cathedral School, receiving his school-leaving certificate in 1955. He entered the Norwegian Cavalry Officers’ Training School and went on to finish his military education at the Military Academy in 1959. Upon completion of his compulsory military service, the Crown Prince went to Oxford for further study. He attended Balliol College from 1960 to 1962, studying social science, history and economics. Like his father and grandfather before him, King Harald adopted the motto “We give our all for Norway” when he acceded to the Throne in 1991.

Harald Steen – Director of the Center for Ice, Climate & Ecosystems at the Norwegian Polar Institute
Dr. Harald Steen received his Ph.D. in 1995 from the University of Oslo, Norway, and has been a professor of zoology and biology at universities in Norway. He has served as a seabird ecologist at the Norwegian Polar Institute since 2005, and in 2013 was appointed the Director of the Institute’s Center for Ice, Climate, & Ecosystems. Dr. Steen specializes in zoology and biology and has published numerous articles in those fields, including studies on the effects of climate change on arctic animals. His particular areas of interest and expertise include population dynamics and foraging ecology.

Børge Ousland – Polar Explorer
Børge Ousland is a Norwegian polar explorer, photographer and writer. Ousland has gone on multiple expeditions throughout the Arctic and Antarctic, and in 1994, he made the first solo and unsupported reach of the North Pole from cape Arktichevsky in Russia. National Geographic Adventure declared him to be “arguably the most accomplished polar explorer alive.” Ousland has published numerous books on his expedition experiences.

Panel moderated by Fran Ulmer – Chair of the U.S. Arctic Research Commission
The former chancellor of the University of Alaska Anchorage and former Lt. Governor of Alaska received her law degree from the University of Wisconsin, Madison. In addition to her role as Chair of the U.S. Arctic Research Commission, she now also serves in an advisory role with the State Department as the U.S. prepares to chair the Arctic Council, an intergovernmental forum for Arctic governments and peoples.

This program was sponsored by: 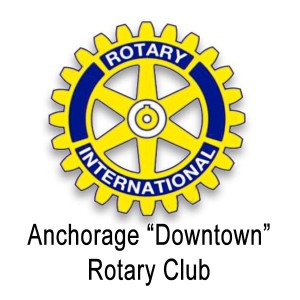