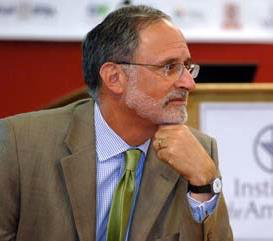 Charles Shapiro is president of the World Affairs Council of Atlanta and a senior lecturer at the Robinson College of Business at Georgia State University. From 2011-2013 Shapiro was the president of the Institute of the Americas, a think tank at the University of California San Diego. Previously, he held numerous senior positions at the U.S. Department of State, including Ambassador to Venezuela, principal deputy assistant secretary for the Western Hemisphere, and Coordinator for Cuban Affairs.

At the World Affairs Council he has organized and led five trips to Cuba, including with Atlanta Mayor Kasim Reed. Shapiro’s op-eds have been published most recently the Atlanta Business Chronicle, the Latin America Advisor, the Huffington Post, the Miami Herald, the San Diego Union Tribune and the Los Angeles Times.

Shapiro earned a B.A. at the University of Pennsylvania and an M.Ed. from Georgia State University.

President Bush awarded Shapiro a presidential Meritorious Service Award in 2004, the Chilean Foreign Ministry made him a knight commander in the Orden al Mérito de Chile in 2005, and Secretary of State Clinton awarded him The Secretary’s Career Achievement Award in 2011. He serves on the Board of Trustees of Agnes Scott College.

The podcast for this event is available thanks to Alaska Public Media, click here to listen