Gregg Roman functions as the chief operations officer for the Middle East Forum, responsible for day-to-day management, communications, and financial resource development. Mr. Roman previously served as director of the Community Relations Council of the Jewish Federation of Greater Pittsburgh. In 2014, he was named one of the ten most inspiring global Jewish leaders by the Jewish Telegraphic Agency. He previously served as the political advisor to the deputy foreign minister of Israel and worked for the Israeli Ministry of Defense. Mr. Roman is a frequent speaker at venues around the world, often appears on television, and has written for the Hill, the Forward, the Albany Times-Union, and other publications. He attended American University in Washington, D.C., and the Interdisciplinary Center (IDC) in Herzliya, Israel, where he studied national security studies and political communications.

If you missed this event you can now listen to a podcast of the presentation courtesy of Alaska Public Media by clicking the link below:

The Middle East and the Trump administration 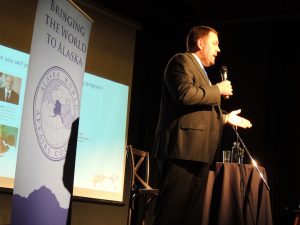