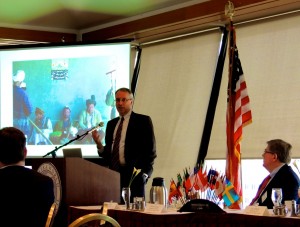 Speaker Bio:
Jim DeHart is the Deputy Assistant Secretary at the Bureau of International Narcotics and Law Enforcement Affairs (INL) at the U.S. Department of State. He has been a career Foreign Service Officer since 1993, specializing in political affairs. In July 2013, he completed an assignment as Director of the Office of Afghanistan Affairs. From 2009-2010, he served in Panjshir, Afghanistan as director of the only civilian-led U.S. Provincial Reconstruction Team (PRT) in the country.

Jim was a Rusk Fellow at Georgetown University from 2007-2008 where he taught a graduate-level course on NATO enlargement and wrote for publication. Previously, he served as Director for Central Asia on the National Security Council Staff at the White House and as Deputy Director for Caucasus and Central Asian Affairs at the State Department. He has worked for two Under Secretaries of State as Special Assistant for Europe and Eurasia and served overseas at NATO Headquarters in Brussels, Belgium; in Melbourne, Australia; and in Istanbul, Turkey. He also served as desk officer for Greece and in the State Department Operations Center.

Jim holds a B.A. from Gonzaga University in Spokane, Washington and a Masters in International Affairs from The Elliott School at George Washington University. He is married to Lisa DeHart, a high school teacher, and has two children: Maria and Stephanie.