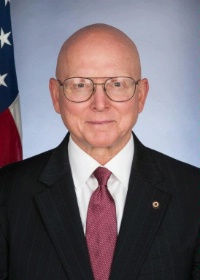 Admiral Robert J. Papp, Jr., USCG (Ret.) became the State Department’s Special Representative for the Arctic in July of 2014, and will lead the effort to advance U.S. interests in the Arctic Region, with a focus on Arctic Ocean governance, climate change, economic, environmental, and security issues in the Arctic region as the United States holds the chairmanship of the Arctic Council from 2015-2017.

Admiral Papp was a career cutterman, having served in six Coast Guard Cutters, commanding four of them: RED BEECH, PAPAW, FORWARD, and the training barque EAGLE. He is a 1975 graduate of the United States Coast Guard Academy. Additionally, he holds a Master of Arts in National Security and Strategic Studies from the United States Naval War College and a Master of Science in Management from Salve Regina College.

Admiral Papp is a native of Norwich, Connecticut.

The podcast for this event is available through Alaska Public Media’s AWAC Presents, click here to listen.