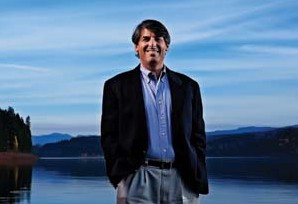 Did you miss miss the program, or would you like to listen again? Check out the podcast on Alaska Public Media by clicking here.

Speaker Bio:
Aaron Wolf is a professor of geography in the College of Earth, Ocean, and Atmospheric Sciences at Oregon State University. He has an M.S. in water resources management (1988, emphasizing hydrogeology) and a Ph.D. in environmental policy analysis (1992, emphasizing dispute resolution) from the University of Wisconsin, Madison. His research focuses on issues relating transboundary water resources to political conflict and cooperation, where his training combining environmental science with dispute resolution theory and practice have been particularly appropriate.

Dr. Wolf has acted as consultant to the US Department of State, the US Agency for International Development, and the World Bank, and several governments on various aspects of international water resources and dispute resolution. He has been involved in developing the strategies for resolving water aspects of the Arab-Israeli conflict, including co-authoring a State Department reference text, and participating in both official and “track II” meetings between co-riparians. He is author of Hydropolitics Along the Jordan River: The Impact of Scarce Water Resources on the Arab-Israeli Conflict (United Nations University Press, 1995); co-author of Core and Periphery: A Comprehensive Approach to Middle Eastern Water (Oxford University Press, 1997), Transboundary Freshwater Dispute Resolution: Theory, Practice and Annotated References (United Nations University Press, 2000), and Managing and Transforming Water Conflicts (Cambridge University Press, 2009); and editor of Conflict Prevention and Resolution in Water Systems (Elgar, 2002). All told, he is (co-) author or (co-) editor of seven books, and close to fifty journal articles, book chapters, and professional reports on various aspects of transboundary waters.

Dr. Wolf, a trained mediator/facilitator, directs the Program in Water Conflict Management and Transformation, through which he has offered workshops, facilitations, and mediation in basins throughout the world. He developed and coordinates the Transboundary Freshwater Dispute Database, which includes a computer compilation of 400 water-related treaties, negotiating notes and background material on fourteen case-studies of conflict resolution, news files on cases of acute water-related conflict, and assessments of indigenous/traditional methods of water conflict resolution. He was also a member of UNESCO’s task force for the development of the Sixth Phase of the International Hydrology Program (2002-2007), the UNESCO/ADC Third Millennium Program on International Waters, and IWRA’s Committee for International Collaboration, and is a co-director of the Universities Partnership on Transboundary Waters.