The Alaska World Affairs Council hosted “How I Ended Up Working on Ebola-The Journeys of Two Alaska Doctors” on February 18th. It was 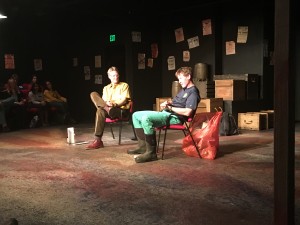 a very engaging and eye-opening experience. Dr. Michael Bruce and Dr. Timothy Thomas shared what it was really like to be on the ground in Africa during the Ebola outbreak, seeing the real effects Ebola through a serious, and sometimes comedic, lens. The experiences of Dr. Bruce and Dr. Thomas were polar opposites.

Dr. Bruce was the first to explain his experience with the Ebola outbreak. He arrived in Guinea a year after the first documented cases. He explained that people were afraid of westerners arriving; they saw their friends and family dead on the street then suddenly taken away by “white men in space suits” (referring to their protective suits). Later, fear was replaced by anger as rumors swirled about Ebola. Some rumors included Ebola not being real, implying that it was created by Guinea for western aid money and that westerners were there to harvest organs. These rumors, as crazy 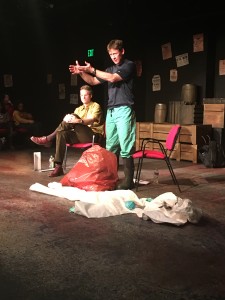 as they seem, were responsible for attacks on the westerners, including Dr. Bruce himself. One close encounter included an attack by an angry mob on Dr. Bruce’s driver.

After Dr. Bruce’s story about anti-westerner sentiment in Guinea, Dr. Thomas shared his experience with Ebola in Liberia. His time in Liberia was completely different than Dr. Bruce’s in Guinea, as he was welcomed with open arms. When Dr. Thomas arrived in Liberia, a majority of the doctors in the country were either dead or were scared into hiding. His main job in Liberia was to take care to of the medical personnel and restore faith in medical personnel. Due to time constraints at the program, Dr. Thomas was asked to wrap-up his story but he did manage to explain his protective suit and the proper procedure for putting it on and taking it off. Once Dr. Thomas was finished explaining his suit, both doctors thanked the audience and the Alaska World Affairs Council for the opportunity to come and speak. They also encouraged the group to watch for a soon-to-released paper they co-authored on the topic.