Ambassador Mark Brzezinski’s speech on the Arctic Executive Steering Committee (AESC) on Tuesday, January 26th at the Dena’ina Center to an audience of Anchorage Rotarians and members of the Alaska World Affairs Council was very informative. He reviewed this past year and the accomplishments that the AESC has made. He also gave a sneak peek of what to expect of them in the coming year. 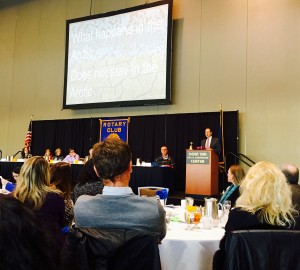 is going to happen to the rest of the world. He gave examples, saying the Northern Alaska shoreline is receding faster than anywhere else in the world and the permafrost is beginning to melt. The AESC has done their best to combat this by lobbying President Barack Obama to issue over forty executive actions dealing with key issues in the Arctic. Ambassador Brzezinski commented on the Committee’s role in the Arctic Implementation Plan and the groundbreaking Paris Climate Accords. He complimented the Committee’s coordination with native groups but did not go into detail about how they did this, nor did he provide any evidence for this claim.

After reflecting on the past year, the Ambassador contemplated both the short-term and long-term future. In the short-term, the Committee wants more enhancement of Arctic knowledge through maps and research. He also hinted at a major Arctic implementation and funding plan for 2016, which should be explored in-depth when it is published on the ninth of February. In dealing with the long-term, Ambassador Brzezinski wants further coordination and collaboration with Asian countries, which are putting more and more resources into the Arctic. Finally, he stressed that uniting agencies and governments in the Arctic region is one of the most essential steps to be taken.