Podcast:
If you missed Consul General Guha’s presentation or would like to hear it again, check-out the podcast of the program on KSKA by clicking here.

Priya is a career diplomat who joined the UK Foreign Office in 1996. Prior to San Francisco, she spent four years at the British High Commission in India, where she was First Secretary for Political and Bilateral Affairs (2007-2011), leading on Indian politics and the UK-India bilateral relationship. During her time in India, Priya also managed the UK’s presence at the October 2010 Commonwealth Games, as well as British PM David Cameron’s visit in July 2010. Previously, Priya worked on European Union and media issues at the Foreign Office in London (including negotiations for the EU Constitutional Treaty). She was also posted as 2nd Secretary to the British Embassy in Madrid, Spain where she dealt with European Union policy.

Priya holds a BA (Hons) degree in Social and Political Sciences from the University of Cambridge (Christ’s College). She is of mixed British and Indian parentage and is married to Luca (an Italian national); they have two young boys. Priya is a keen badminton player and enjoys skiing, as well as supporting Luca’s triathlons. 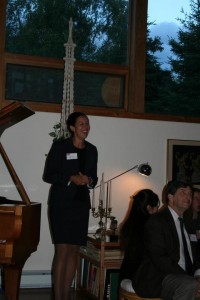 Consul General Guha addresses Board Members & guests at the reception