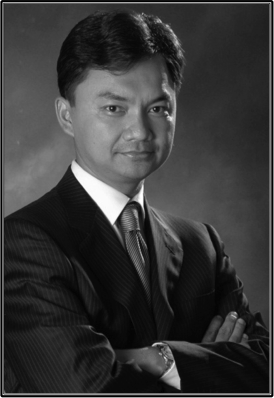 Bio:
Dr. Dino Patti Djalal is the Ambassador of the Republic of Indonesia to the United States, a speech writer, youth activist, academic and national best selling author.

He was named as the Indonesian Ambassador in May 2010 and presented his credentials to the President of the United States on September 16, 2010. He was previously a Special Staff for International Affairs and Presidential Spokesperson for President Susilo Bambang Yudhoyono (2004-2010). Dr. Djalal first joined the Department of Foreign Affairs of Indonesia in 1987. He was posted to Dili, London and Washington DC, before being appointed as Director for North American Affairs (2002-2004). In the early years of his career, as assistant to Director General for Political Affairs, he was involved in the settlement of conflicts and disputes in Cambodia, Moro – The Philippines, South China Sea, and East Timor.

Dr. Djalal – working closely with the Pentagon – is the initiator of the “US-Indonesia Security Dialogue”, an annual bilateral consultation on security and defense matters that was conceived in 2001, and has continued to this day. In 2008, he established the “Innovative Leaders Forum” to promote innovative leadership from all sectors of Indonesian society. The Forum has held a series of public seminars presenting emerging young leaders in: local governance, education, peace workers, health, bureaucratic reform, entrepreneurship, moderate Islam, and climate change.

Dr. Djalal has appeared on radio shows and toured Universities in Indonesia to present the case for open pluralistic nationalism and a new Indonesian internationalism. A recurring theme in his speeches is the imperative for the youth to think for themselves and for their own time, and avoid the rigid dogmatism that was characteristic of the intellectual upbringing of the past. Dr. Djalal has written many articles for domestic and international media. He has also written multiple books, including “Harus Bisa!” (The Can Do Leadership). The book has become a national best seller in Indonesia – with some 1.7 million copies sold. Dr. Djalal is a member of the Governing Board of the Institute for Peace and Democracy, which was established by the Bali Democracy Forum; a member of the Executive Board of the Indonesian Council on World Affairs (ICWA); and founder of Modernisator, a movement of Indonesian young achievers. Dr. Djalal is considered by social media networks to be among one of 5 most influential Indonesian politicians whose means of communicating by Twitter is regarded as prolific (3rd most influential Indonesian politician tweeter).

In October 2010, the Royal Islamic Strategic Studies Centre (in Jordan) listed Dr. Dino Patti Djalal among the 500 most influential Muslims in the world. He is also the initiator and organizer and world-record holder – certified by “Guinness Book of World Records” – of the largest “angklung” bamboo musical ensemble (5,192 people), held at the National Monument in Washington DC on 9 July 2011.

Dr. Djalal is married to Mrs. Rosa Rai Djalal, and they have three children. 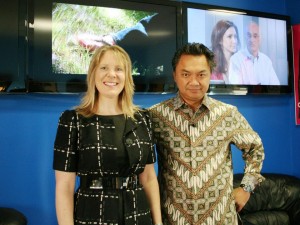 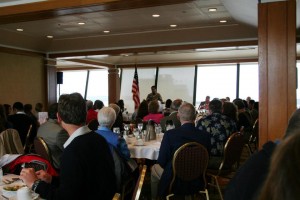 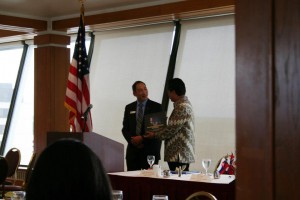 AKWorld Board Chair Garret Wong graciously receives a book from Ambassador Djalal (followed by a hug!) 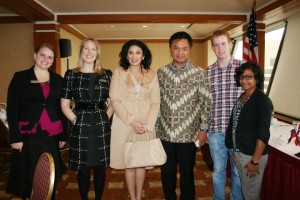