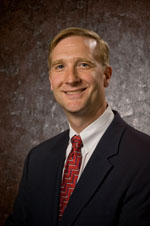 Christopher A Preble, Vice President for Defense and Foreign Policy Studies at the Cato Institute

Podcast:
If you missed Dr. Preble’s presentation or would like to hear it again, check-out the podcast of the program on KSKA by clicking here.

Bio:
Christopher A. Preble is the vice president for defense and foreign policy studies at the Cato Institute. He is the author of three books including The Power Problem: How American Military Dominance Makes Us Less Safe, Less Prosperous and Less Free (Cornell University Press, 2009), which documents the enormous costs of America’s military power, and proposes a new grand strategy to advance U.S. security; and John F. Kennedy and the Missile Gap (Northern Illinois University Press, 2004), which explores the political economy of military spending during the 1950s and early 1960s. Preble is also the lead author of Exiting Iraq: How the U.S. Must End the Occupation and Renew the War against Al Qaeda (Cato Institute, 2004); and he co-edited, with Jim Harper and Benjamin Friedman, Terrorizing Ourselves: Why U.S. Counterterrorism Policy Is Failing and How to Fix It (Cato Institute, 2010). In addition to his books, Preble has published over 150 articles in major publications including USA Today, the Los Angeles Times, the Financial Times, National Review, The National Interest, the Harvard International Review, and Foreign Policy. He is a frequent guest on television and radio. Before joining Cato in February 2003, he taught history at St. Cloud State University and Temple University. Preble was a commissioned officer in the U.S. Navy, and served onboard USS Ticonderoga (CG-47) from 1990 to 1993. Preble holds a Ph.D. in history from Temple University.

Chris Preble addresses some tough questions from the audience

Submarines, bombers, or ICBMS? Listen to the podcast to hear Chris Preble’s thoughts on the options