Podcast:
If you missed the panelists’ presentation or would like to hear it again, check-out the podcast of the program on KSKA by clicking here.

Four Alaskan Service Personnel who recently returned from Afghanistan will share their insights on this overseas duty.

Army Major Jeanette Kautzman:
Major Janette L. Kautzman grew up in Warren, Ohio. In 1993, she enlisted in the Army as a combat medic and was stationed at Fort Sill, Oklahoma. Major Kautzman graduated from the United States Military Academy at West Point with a Bachelor’s of Science degree in Political Science in 1999 and was commissioned as a Second Lieutenant in the Military Police Corps.

In 2007, Major Kautzman transferred to become a Civil Affairs (CA) officer. She was assigned as a CA Team Leader in the 97 th Civil Affairs Battalion and was deployed to Mindanao, Philippines in support of Operation Enduring Freedom-Philippines. Major Kautzman is currently assigned as the 4th Brigade (Airborne), 25th Infantry Division’s Civil Military Affairs Officer at Joint Base Elmendorf-Richardson, Alaska.

In December 2011, Major Kautzman deployed to Afghanistan in support of Operation Enduring Freedom. While deployed, she was responsible for the governance and development planning for Khost and Paktya Province. Major Kautzman was responsible for synchronizing efforts between the Brigade and other U.S. agencies such as the Department of State, United States Agency for International Development, United States Department of Agriculture, as well as the International Committee of the Red Cross, non-governmental organizations, and Afghan governmental officials. Major Kautzman was additionally responsible for the Afghan reintegration program, the brigade’s Female Engagement Team, and the Commander’s emergency funding program.

Major Kautzman attended Intermediate Level Education at Fort Leavenworth, Kansas in 2010. She received a Master’s Degree in Global and International Studies from the University of Kansas. Additionally, she has a Master’s of Business Administration from Walden University.

Captain Shannon M. Osterfeld grew up in Cincinnati, Ohio. She enlisted in the Ohio Army National Guard as a combat medic in 2003. She graduated from the University of Cincinnati with a Bachelor’s of Science in Nursing in June 2007 and was commissioned as a Second Lieutenant in the Army Nurse Corps in July. CPT Osterfeld’s military education includes the Army Medical Department Officer Basic Course and the Emergency Room Nursing Course.

Assignments include Tripler Army Medical Center, Honolulu, HI, where she served as a staff nurse and a charge nurse on the General Surgery Ward and then in Emergency Department and Ft Wainwright, AK where she is currently the Brigade Nurse for the 1/25 Stryker Brigade Combat Team.

In May 2011, CPT Osterfeld deployed to Afghanistan in support of Operation Enduring Freedom. While deployed she was in Zabul Province for 6 weeks, where she was the OIC of an aid station treating over 200 sick call patients. Her and her team assisted the Forward Surgical Team by transporting over 100 patients in and out, augmenting their staff in four MASCALs, and operating the walking blood bank. From there she jumped her aid station to a new location where she and her team established a new aid station, treated over 400 sick call patients, more than 30 battle injured patients, and evacuated 17 critically ill/injured patients. While the Brigade Headquarters was conducting split operations she coordinated over 100 medical evacuations for critically ill and injured soldiers throughout the battle space. Other contributions while deployed included training over 50 Afghan Uniformed Policeman in first aid and conducting a first aid train-the-trainer class enabling them to conduct their own training. Traveled to remote Tactical Infrastructure, working with medics who were operating independently to ensure that they were providing safe medical care, training them on medications, and reviewing MASCAL plans with them. She served far forward on the battlefield, establishing an Advanced Trauma Life Support Team, in support of deliberate combat operations. 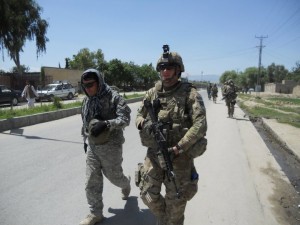 In March 2003, SFC Vetterkind deployed to Iraq in support of Operation Iraqi Freedom. While deployed he was in Balad for 8 months where he conducted over 200 convoy security missions. From there he and his Team moved to Tikrit where he conducted Internment and Resettlement Operations by providing security for Enemy Prisoners of War and transported detainees to confinement facilities. In March 2011, SFC Vetterkind deployed to Afghanistan in support of Operation Enduring Freedom. While deployed to Laghman Province for 3 months where he served as a Squad Leader, he and his Squad conducted Police Mentorship Training with the Afghanistan National Police aiding in the successful transition of power of Laghman Province to the government of Afghanistan. From there he and his Squad jumped to Parwan Province where he conducted over 200 combat patrols providing outer perimeter security for Bagram Airfield. 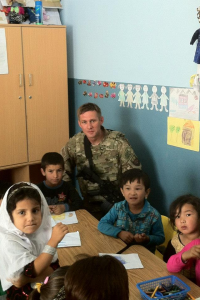 Air Force Senior Master Sergeant Chad Anderson was born and raised in Johnson City, Tennessee. He enlisted in the United States Air Force as a Heating, Ventilation and Refrigeration Apprentice in 1996. Assignments throughout his Air Force Civil Engineer career include Davis Monthan AFB, Tucson, AZ and Elmendorf AFB, Alaska. He also has two short temporary duty assignments to Aviano AB, Italy and to Kadena AB, Japan. Upon leaving active duty in 2004, he decided to continue his military career in the Air Force Reserves here in Alaska, and is currently the Infrastructure Superintendent for the 477th Civil Engineer Squadron on JBER. In his civilian job, he is an HVAC/R mechanic as a DoD contractor with Shaw Environmental and Infrastructure on JBER, and a member of the Local 367 Plumbers and Steamfitters Union.

Senior Master Sergeant Anderson has deployed twice in support of Operation Iraqi Freedom and one time for Operation Enduring Freedom. His first Iraq tour was 2003/04 to Camp Sather, Baghdad, Iraq and the last time in 2009 to Kirkuk AB. His most recent deployment, beginning February, 2012 was a tasking as an Army Individual Augmentee as the Base Support Group Engineers Superintendent of Operations, ISAF NATO Headquarters, Kabul, Afghanistan. Here, Sergeant Anderson lead a multi-national, engineer group, directly supervising over 60 engineers and craftsman from 14 different nationalities. Of these engineers, 46 were local national Afghans that he interacted with on a daily basis. He coordinated all the maintenance to over 100 NATO structures and was responsible for all electrical, plumbing, air conditioning, waste water treatment plant and structural repairs for over 1,500 personnel and 37 NATO General Officers. He was also responsible for scheduling and providing engineer maintenance support to numerous entities throughout the city of Kabul, such as the Presidential Information Coordination Center, Ministry of Defense, Ministry of Interior and Kabul International Airport. 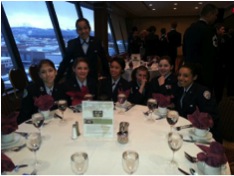