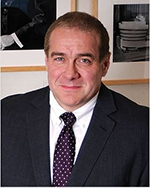 The Alaska World Affairs Council Presents
In Partnership with

“Alaska’s Place in the World Economy”

Scott Minerd takes a closer look at Alaska’s economic metrics and how they compare with the rest of the U.S. and the world. He has said, “Alaska, within our lifetime, may become the most dynamic growth engine of all the states of the Union.”

Minerd has particular expertise in the intersection of finance and public policy and is regarded as a leading voice in how the private sector can work with all levels of government for the benefit of both the public good as well as investors. Internationally, during the European exchange rate crisis, Minerd was the architect responsible for restructuring Italy’s foreign currency debt, thereby enabling Italy to avoid a painful IMF restructuring.

Prior to Guggenheim, Minerd was a managing director for Morgan Stanley and later Credit Suisse where he oversaw fixed-income credit trading in the United States, Europe and Asia. Minerd began his career as a CPA and worked for the public accounting firm of Price Waterhouse. He received a bachelor’s degree in economics from the Wharton School at the University of Pennsylvania and completed graduate work at both the University of Chicago Graduate School of Business and the Wharton School at the University of Pennsylvania.
Minerd is a regularly featured guest on CNBC, Bloomberg Television and FOX Business News and is frequently quoted in The Wall Street Journal, Financial Times, Barron’s, and other financial publications. Minerd is Chairman of the Milken Institute California Center and special advisor to the CEO of The Union Rescue Mission, America’s oldest mission for the homeless. Additionally, Minerd serves on the board of Strategic Partners Among Nations and the advisory board to the Mustard Seed School, an award winning school for inner city education.