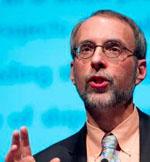 “Alaska’s Natural Gas: Does Any Country Need It?”

Larry Persily serves as the Federal Coordinator for Alaska Natural Gas Transportation Projects. He was nominated to the post by President Barrack Obama on Dec. 9, 2009, and was confirmed by the U.S. Senate on March 10, 2010. As federal coordinator, he leads a staff of 10 professionals in the Anchorage, Alaska and Washington, D.C. offices and is responsible for coordinating the activities of federal agencies with respect to permitting and regulations that impact the construction of a natural gas pipeline from Alaska’s arctic to North American consumers.

Prior to assuming the post as federal coordinator, Persily worked for more than a decade in Alaska on oil and gas issues, including the long effort to develop a North Slope natural gas pipeline, for three Alaska governors and the Alaska state legislature.

Most recently, Persily served as an associate director of the Office of the Alaska Governor’s Washington, D.C. Office working on oil and gas, arctic, commerce, transportation and tax issues, and as an aide to Alaska State House Finance Committee Co-Chair Mike Hawker, handling oil and gas issues.

Persily served as an assistant to the commissioner, Alaska Department of Revenue from 1997 to 1999 and then as deputy revenue commissioner 1999 to 2003. He returned to the department in 2004 to assist the state in its work to negotiate a contract with North Slope oil and gas producers toward developing the natural gas pipeline.

He also has consulted on energy and fiscal issues for the University of Alaska Anchorage Institute for Social and Economic Research and the Alaska Municipal League. Persily has represented the state at numerous oil and gas conferences over the years. He has presented on Alaska oil and gas and fiscal issues at events nationally and internationally.

Persily also has had a distinguished career in journalism holding editorial management positions at the Anchorage Daily News, Juneau Empire and The Paper [Juneau], and working as a correspondent for Petroleum News, the Associated Press, the Anchorage Daily News Capitol Bureau and the former Anchorage Times. He co-owned the Wrangell Sentinel from 1976 to 1984.

Persily graduated in 1972 from Purdue University, West Lafayette, Indiana and holds a Bachelor of Arts degree in journalism.