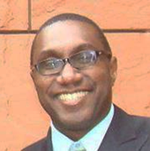 “Climate Change: Forest Conservation in the Republic of Suriname and the Way Forward”

Ambassador Mac Donald was born in Suriname. He received his legal education at the Law Faculty of the Anton de Kom University in Paramaribo, Suriname (1994) and at the American University in Washington DC, where he obtained an additional Masters of Laws in “Laws and Government” at the Washington College of Law in 2003. In addition he acquired post doctoral honors from the United Nations Institute for Training and Research (UNITAR), the International Labor Organization (ILO), the Universities of Utrecht and Amsterdam in the Netherlands, and from the Catholic University of Leuven in Belgium. He is also a “Romulo Gallegos Scholar” of the Inter American Commission on Human Rights at the Organization of American States.

Before Ambassador Mac Donald joined the Foreign Service of the Republic of Suriname in 1998, first as the Deputy Chief of Mission at the Permanent Mission of his country to the Organization of American States en thereafter as the Charge d’ Affairs a.i. at the Embassy in Washington DC, he served at the Ministry of Justice and Police as coordinator of the Unit for International Affairs and Human Rights.

He served his country in the capacity of Coordinator to the Summit of the Americas Implementation Process (SIRG) and represented Suriname in this regard as its Chief Negotiator in a number of high level meetings (USA 2002), (Mexico, 2003), (Argentina 2005), (Dominican Republic, 2006).

Ambassador Mac Donald is a senior legal advisor on international human rights topics and a principal speech writer for his government on international, legal and political matters. He has represented his country as a human rights specialist before a number of Human Rights Committees at the United Nations (e.g. the UN Committee Regarding the Elimination of Racial Discrimination (2009); the UN Committee for the Rights of the Child (2007) and the UN Committee against the Discrimination of Women (2002), and at the Organization of American States such as at the Moiwana hearings before the Inter American Court of Justice in 2004.

He is a regular contributor to the Suriname Law Journal and has written extensively on human rights, environmental, diplomatic and international political issues. He has built up extensive knowledge, skills and network in multilateral diplomacy in this regard.

Since his arrival at the United Nations three years ago he has twice served as the Chairman of the CARICOM Caucus of Ambassadors to the United Nations and as Chairman of the GRULAC Regional Grouping. He is currently a Vice President of the General Assembly, in which capacity served on numerous occasions as Acting President. Recently he has been instrumental in having the first Surinamese national and human rights expert being elected to the Human Rights Committee.