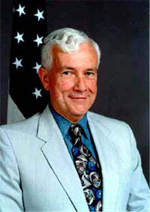 Ambassador Charles Snyder
Former Ambassador to the Republic of Ghana

Snyder served in the Senior Intelligence Service at the CIA as National Intelligence Officer for Africa from 1992 until April 1995. He retired from the U.S. Army in 1991 after 22 years of service. During the closing years of that career, he served as Senior Political-Military Advisor to State’s Africa Bureau. He served as military advisor on the team which mediated the Tripartite Agreement between Cuba, Angola, and South Africa; led the team that established the Joint Military Monitoring Commission which implemented the ceasefire along the Angola-Namibia border; chaired he military discussions supporting the Portuguese mediation of the Angolan Civil War; and led the U.S. technical team supporting the successful Italian effort to negotiate an end to the Mozambican Civil War.

He received a B. A. in Economics from Fordham University, an M.B.A. in International Finance from American University, and conducted additional post-graduate work in International Relations at Catholic and Howard Universities. He is a Fellow of the Inter-University Seminar on Armed Forces and Societies, a Distinguished Visiting Lecturer of the Foreign Service Institute, and a life member of the African Studies Association.