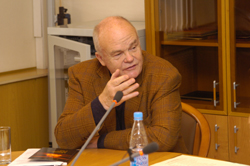 “Promoting Safe, Secure and Peaceful Growth of
Nuclear Power: Next Steps for Russia and the United States”
Friday, 24th September 2010 – Hilton Hotel
Doors open at 11:30 a.m. – Program begins at 12:00 p.m.
For Reservations
RSVP by Wednesday, 22nd September
to the Alaska World Affairs Council
by telephone 276-8038 or by email to AlaskaWorldAffairs.org .
Lunch Program $20 for Members – $25 for Non-Members – $10 for Coffee Only
Evgeny Velikhov

Evgeny Velikhov was born on February 2, 1935 in Moscow.

In 1958 Dr. Velikhov graduated from Moscow State University specializing in “Theoretical physics”. After postgraduate studies he worked as a researcher at the Kurchatov Institute of Atomic Energy, working up the ranks to President.

Dr. Velikhov is a major scientist in the field of plasma physics and controlled thermonuclear fusion. He proposed and experimentally realized a new impetus for the magnetic-hydrodynamic generation o high-power, which has found a practical application in the deep electromagnetic sounding of an earth-crust.

He is a scientific leader in the development of a unique inductive accumulator of energy. This is the largest in the world energy complex TIN-900 for feeding impetus thermonuclear and simulation units. He was also responsible for the development and introduction of gas and technology lasers in this program.

Dr. Velikhov has published more than 200 articles and reports in scientific magazines and proceedings at many conferences. Among numerous state awards, honorable titles and prizes, he won the Laureate of Global Energy Prize in 2006. He was also proclaimed by the USA as a “Hero of Chernoble”, who personally oversaw the cleanup of this unprecedented nuclear disaster.

Velikhov is married and has two sons and a daughter.
Hobbies: horses, skiing, and steam bathing.

For more information on the Kurchatov Institute please visit: http://www.kiae.ru/index.html